Read the Bible as events occurred in this chronological NLT with wide margins for your prayers and artistic response!
at October 09, 2020 No comments:

Bible Prayers: Praying to hear and be heard

Praying to hear and be heard - new on Bible Prayers blog

Many Psalms began as the personal prayers of King David, who consistently turned to God with his problems and praise. These prayers and others in the Bible still speak for us today.

Poetry Editor: Comparisons work in poetry, not in life!

Poetry Editor: Comparisons work in poetry, not in life!:   Comparing one person to another or one thing to something better (or worse!) does not work well in real life. In poetry, however, comparisons can reveal the abstract in visible terms readers can picture and, therefore, better understand.
at October 07, 2020 No comments:

Bible Reviewer: KJV Sword Study Bible:   After learning Whitaker House had published the KJV Sword Study Bible with the direct words of God in red, I just had to order a copy. Although many New Testaments can be found with Jesus’ words in red, I’d never seen a red-letter edition of the Old Testament.
at September 21, 2020 No comments:

When Intervarsity Press kindly sent me a review copy of Soul Care in African American Practice by Spiritual Director Barbara Peacock, I joyfully read a paragraph in the Preface describing the author’s upbringing, which reflected my own nurturing home and the deeply held convictions that grew from that love. As Dr. Peacock said:

“I thank God for his faithfulness toward my siblings and me in that he blessed us with an environment of a loving, caring, and nurturing community, including our parents, grandparents, aunties, uncles, and cousins. Such a foundation in my Christian journey allows me to seek ways to love unconditionally. Consequently I emphatically embrace the theology of love. I believe that love covers all kinds of sin. I believe what the world needs more is love. And is love not the greatest commandment? This is the greatest call: to love.”

Indeed, the certainty that God is love sets every troubling thing into perspective and enables us to discern the responses God wants from us as we ask, “What is the loving thing to do?”

Sadly, many people from every culture and country lack the loving care and encouragement needed to be all they’re meant to be, but thankfully, our spiritual growth doesn’t rely on love received from the human race but from God’s grace. Often, the greater the obstacles, the greater God graces us with His powerful presence.

As Dr. Peacock points out in the introductory chapter “African American Spirituality”:

“While in chains, many slaves expressed great faith in God, the only one who could deliver them from such inhumane circumstances.”

“It was on those slave ships making the Middle Passage that we find the origins of African American spiritual direction and soul care.”

However, “Many make the assumption that all Africans first heard about Christ when they came to America. This is far from true.”

“In fact, the African church fathers contributed to the formative years of Christianity. St. Augustine of Hippo as well as Egyptian and North African scholars such as Clement, Origen, Tertullian, and Athanasius are widely recognized as fathers of the church.”

“The wording, the verbiage, and the tone of slave narratives and spiritual songs in the African American tradition tell the journey as a story. Such songs lifted the heart and affirmed hope for a better day. The central relational focus of the spirituals was God. He was and remains the hope, the deliverer, and friend.”

In the following chapters, Dr. Peacock focuses on African American leaders who “have been tenacious in pursuing a relationship with Yahweh.” One seemingly unlikely person was Dr. Frederick Douglass, better known as an abolitionist, reformer, and former slave, whose master’s wife read the Bible to him and helped him learn to read.

“From memory, he began to speak words he heard her say while they read together. The way they read the Bible together resembles the Latin reading process called lectio divina, a slow, thoughtful reading of the text with God’s presence in mind.”

After explaining this ancient spiritual practice, the author provides “Questions For Reflection” to help us engage more fully. That section, included in subsequent chapters, too, additionally provides spiritual direction in talking with God, hearing from God, visually reflecting on the Lord, and praying.

“As a result of learning to read the Bible, Douglass became a well-known intellectual in his community and beyond. Reading was the fundamental skill that prepared him to live a life that transformed not only himself but also others. For him reading was not merely glancing over a text but meditating on what he heard, which eventually equipped him to impact millions.”

The next chapter, “Spiritual Direction and Prayer,” highlights the soul care of Dr. Martin Luther King, Jr., whose “life of contemplative prayer made him an effective spiritual leader.” The author goes on to say:

“It would have been impossible for Dr. King to fulfill the mandate on his life without the assurance of God’s unconditional love for himself and all humanity…. Thus, as a leader, he was called by God to lead in a movement for freedom that was centered in love – that is, Christ-centered love. Such love is the kind Dr. King allowed the Spirit to form in him amid racial discord. With such love, he loved God and his people to the extent he was willing to die for what he believed.”

In the chapter “Meditation and Contemplation,” we learn of the “conscientious decision to speak silently for her civil rights” that Mrs. Rosa Parks made before getting on that Montgomery bus. Having been brought up in a Christian home, she spent much time seeking God and developing the soul care needed to equip her for the task at hand.

“During the civil rights movement, Mrs. Parks needed the supernatural peace of God as she led the people God called her to serve. She understood the cost of developing and nurturing God’s peace within her that would equip her as a spiritual leader. Because of her faithfulness, God graciously provided her peace in the midst of adversity. In order to maintain and abide in this peace, Mrs. Park’s challenge was to keep her mind fixed on God.”

Throughout this enlightening book, Dr. Barbara Peacock focuses on the practices of ten African American leaders, whose companionship with God enabled them to do the work to which they had been called. By tending their own souls through prayer, meditation on God’s Word, and reliance on the Holy Spirit, they could then provide spiritual direction to others.

In “Conclusion,” the author calls us to re-call:

“The journey of all people (regardless of color or ethnicity) began in Genesis. The inclusivity of the Spirit of God is seen in the divine entity of life and the breath that all humanity shares…. All creatures, whether black, white, brown, red, or yellow, are communicative beings designed for the glory of God. All peoples are created to worship and to be in holy communion with our Creator.”

May we all enter into this intimate relationship with the Lord and express God’s love to others in Jesus’ Name.

As an author, essayist, naturalist, and “mad farmer,” who challenges us to expand our thinking, the perspectives of this poet might lift our views.

As negative, worrisome news pummels our ears, the last thing we might feel like doing is praise! But that’s the very reason the Bible encourages us to “offer to God a sacrifice of praise.”

“Through Jesus, therefore, let us continually offer to God a sacrifice of praise—the fruit of lips that openly profess his name,” Hebrews 13:15, New International Version (NIV.)

Some time ago, I asked, “Is there something You want me to do, Lord?” and, immediately, the word “Praise” came to mind. Having been raised in a polite Christian family, the inclination to thank God and people came easily enough, but praise? Frankly, I wasn’t sure I knew what praising God truly meant – or at least how it differed from thanksgiving.

After looking up several dictionary definitions, I saw praise as expressing approval more than the appreciation shown in giving thanks. Praise  commends, lauds, and says good things – not with gratitude in mind so much as acknowledgement, commendation, and re-commendation. Or, to say it another way, praise focuses on Who God Is, more than what God does. Praise pours out our love to the Lord.

The Psalms provide wonderful examples of ways to praise, pray, thank God – and lament. A closer than usual study of those priceless poems shows that almost all of the lamentations begin with a concern or complaint but end with purposeful thanks or praise. That uplift at the end exemplifies a strong faith in God, despite the circumstances, and also shows how a poured-out-heart must remain completely honest and wholly vulnerable.

Ready to praise but not particularly practiced, I immediately sensed God’s help as relevant thoughts and phrases caught my attention each morning. Once I had typed those beginning lines in a computer file, other thoughts and lines swiftly followed – somewhat like a stream-of-consciousness flow, but more “subconscious” or even “unconscious” of what might come next.

Spontaneity remained key–often with a phrase that startled me or an insight God gave in thoughts I’d never had before the poem gained my attention. So my “method” became an intent to obey, rather than create, as I wrote down each spontaneous thought or phrase with the anticipation that the rest of the words would freely follow. Usually they did, sometimes even exploding onto the page. Other times they seemed more reflective, depending, perhaps, on my mood or something God wanted me to consider as I wrote to discover what the lines had to say. For instance:

without Whom
there is none:

no cause for joy,
no source of love,
no hope of peace.

Praise God Who Dwells
in us and around us –
enthroned on our praises
– uplifting our days.

Maybe you’ll prefer to call such poems“ meditations.” Maybe you’ll see them as prayers. Or maybe, as you offer up your praises to God, you’ll be stunned by the unexpected thoughts and ragged edges that come to mind. Write them down – especially if you don’t feel like it!

under Whom I crawl
when I feel low,
the Rock I climb
to get a higher view.

May the Lord bless you and your life of purposeful praise, whether joyful or sacrificial.

Note: The above poems and text came from the introduction to my book PRAISE! published by Cladach Publishing.

Bible Reviewer: One Year Chronological Bible Expressions :    Read the Bible as events occurred in this chronological NLT with wide margin...

Talking to the Wren: haiku, short verse, and one long poem 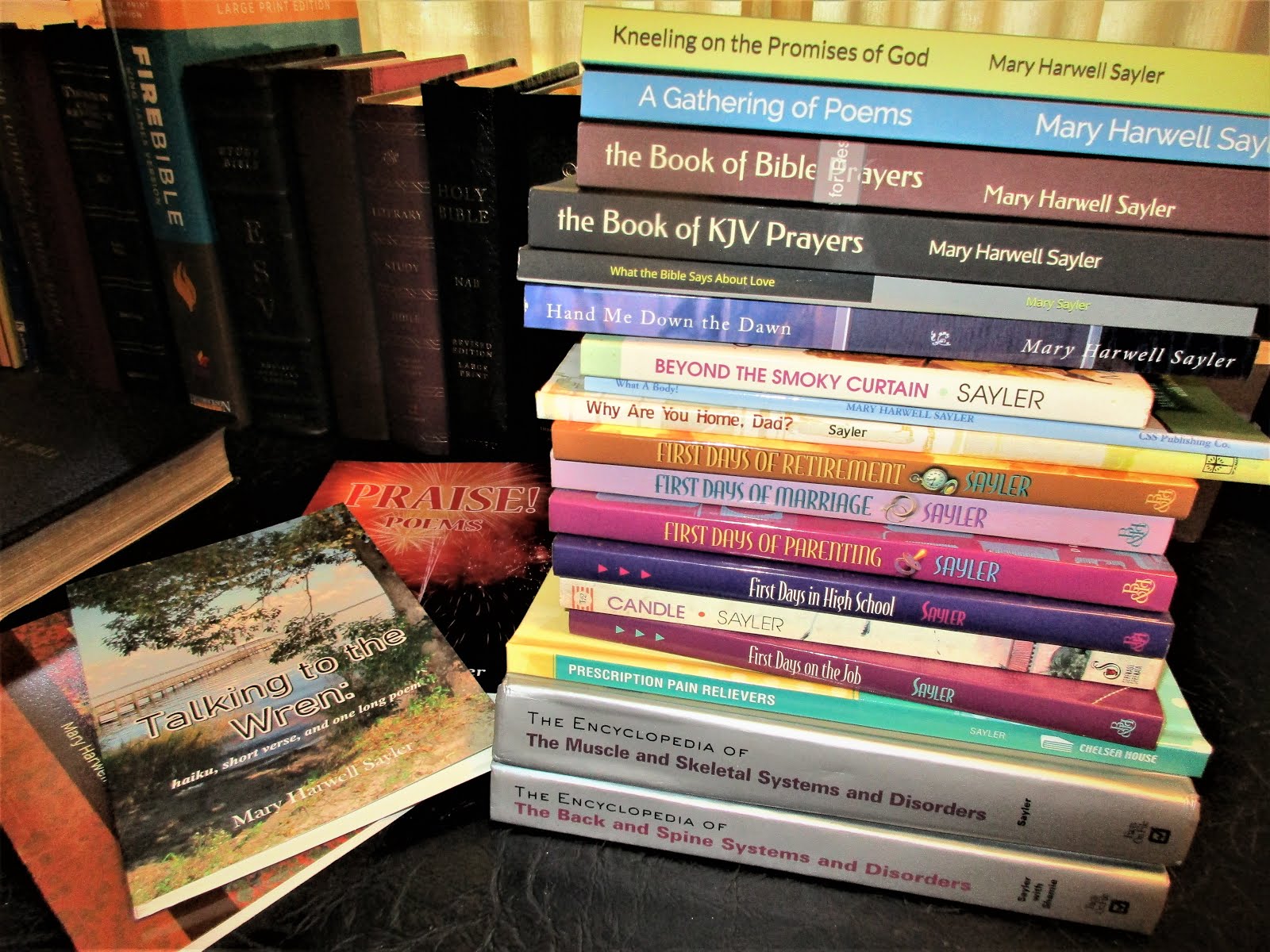 Clicks photo for Books by Mary on Amazon

Buying books through the links on this site

As an Amazon Associate, Mary Sayler earns a small fee from purchases through this site. Books written by her also earn a royalty.

Kneeling on the Promises of God

the Book of KJV Prayers

What the Bible Says About Love

The Poetry Editor and Poetry

Mary Harwell Sayler
Mary Harwell Sayler is a Christian poet, writer in all genres, and lifelong student of God's Word. Her many books include A Gathering of Poems and Talking to the Wren. Recently she collected most of the prayers in the Bible into a prayer book paraphrased in everyday English then in the King James Version only. She also collected God's promises in the Bible and responded to each with a contemporary prayer for the book Kneeling on the Promises of God.